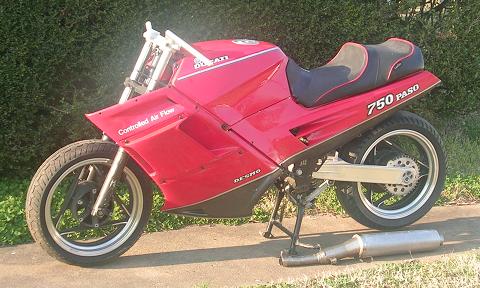 This is a project that has been developing over the last couple of years as I was working on Vicki's Paso. During this period of nearly two years, I had accummulated the forks, brake calipers, full-floating Brembo rotors, and 17" wheels from a '94 Ducati SS900. I gained these from assisting a friend with the valve adjustments on two of his '02 Ducati 998 bikes. A little later, I had an acquantaince whom I'd met several years ago give me a 1988 Ducati Paso 750 rolling chassis with most of the bodywork and a Corbin seat for free, just to get it out of his storage unit as he was moving again and was tired of moving this stuff with him. The frame is untitled, but the gears in my head started turning. Eventually, the rust-free tank and Corbin seat wound up on Vicki's Paso (actually mine, now).

At first I had visions of putting a carbed Ducati 900 engine in the chassis and maybe making it a track toy to just goof around with. Just something to have some mild fun with and something that wouldn't cost much. I was actually thinking of a "freebie Ducati". Keeping the items I wanted to use, selling off the items I wasn't going to use, and purchasing a cheap used engine, I was thinking I may be able to pull it off.

I soon was thinking a "track bike" would not be practical in my situation, so when a freebie titled frame landed in my lap, it seemed like a deal too good to be true....and it was. Over a year later, he still cannot locate the title that was signed over to him (he's a dealer), and now I have two useless frames. I guess he had good intentions.

Then, an engine showed up on eBay and it was 20 miles from my house. It was a 916 engine from a 1999 ST2 complete with wiring harness, ECU, throttlebodies, and even the airbox and a K&N air cleaner. I felt that this was what I needed, but there would be issues of cooling for a liquid-cooled engine in an air-cooled frame and reports I'd heard about the front wheel hitting coolers placed in the traditional location being a potential problem.....but I still bought the engine, anyway.

So, now I had the majority of parts I would need to build another Paso...a custom Paso, but I had two untitled frames....two frames that appeared to not be able to be titled. Before I spent any more money on the project, I needed a titled frame.

A couple of months before buying the engine, I had contacted a guy in the Boone, NC area who was parting out a 1988 Paso. I was only interested in the headlight fairing and the rear brake master cylinder. He offered me everything he had left, including the engine, but I was afraid that if I bought that, I'd just restore it back to an original configuration. I was already doing that with an '87 Paso and wanted to do something different and unique. I wound up getting a guy in California to buy the engine, and I bought everything else. Over the last few months, I'd recoup'ed all of my costs, and some extra, as I've been selling off the parts I wasn't planning on using. A "freebie Ducati" still may be within my grasp!

I now have about 95% of what I need to build a 1988 Paso with a liquid-cooled 916 desmoquattro engine, and I still have some extra parts I can still sell. The two largest issues with this project will be to provide liquid-cooling, and the other will be the rear suspension. The rear suspension because when I went to try to stuff this engine into the Paso's frame, I discovered that the swingarm bosses on the engine are too wide for the original swingarm to bolt onto it......

I'll update this page as this interesting project starts to unwind.

Back to Desmo Demon Homepage.