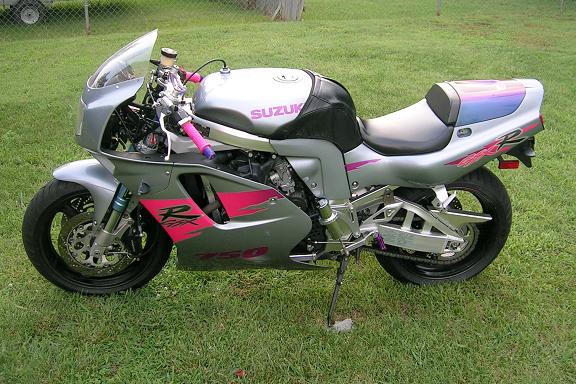 Above is a picture of Vicki's '94 GSXR. She bought it from the original owner in 2003, just before her accident. The previous owner didn't like the riding position, so he installed some handlebars like what you'd find on a Standard. The bars hit the headlight fairing, so he cut the fairing and windshield, removed the fairing stay, and installed bar-end mirrors. This wasn't a position that Vicki was comfortable with from being used to her deceased '93 GSXR, so she immediately went back to installing the clip-ons to reinstate the factory riding position.

Here we are, 2008, nearly five years after Vicki bought the bike, and I'm finally doing something about her not having any mirrors on the bike. I first looked at buying a new fairing. At $350+, it wasn't feasible. Then, I looked for used ones....and looked....and looked....and looked. These pieces of plastic were going well over $100, and most of them were damaged. I eventually bought one at a "deal", until I realized it had two broken headlight mounts. I was going to repair and repaint this one and even bought some matching paint at the auto paint shop. That repair never materialized. I then opted to have someone else plastic weld the "ears" back onto the original fairing. I bought a busted fairing so that I could cut the "ears" off and have them welded on. Another year later, I decided to just do it myself.

Since this write-up will mainly be about the plastic welding, I'll just tell you how I cut the ears, because it is not a common thing to do. First, I removed the modified windshield, installed a standard shield, cut the ears off the busted fairing so that there would be an overlap with the original fairing, connected the ears to the windshield, aligned the ears with the fairing, marked the ears, then cut on the line. Simple!

Next, the fairing and the ears were filed down at a 45-degree angle, so when they were aligned, it created a "V" notch between them. I did this fairly quickly with a Dremel and a sanding drum. So that I didn't have any issues with incompatibility with plastics, I cut thin strips of plastic from the busted donor fairing with my metal shears. This way, the fairing, ears, and weld filler were all the exact same ABS plastic.

Instead of buying some fancy plastic welder, I opted to do it the old-fashioned way.....with a soldering iron. I got the iron nice and pre-warmed, aligned the parts to be welded by using the windshield as a jig to hold them in place, and then I laid a strip of the plastic filler and started melting it into the "V" groove between the two pieces of plastic.

If you do not let the plastic get hot enough to fuse with all the parts that you are welding together, you'll get a "cold weld" which does not have a good bond at all. This will be a weld that is together just well enough to hold the pieces together and make you "think" you have it welded together. Once you apply a little bit of force to the two pieces, they'll snap right at the seam line. You can also sometimes get a knife blade under the lip and pop it right back out. To try to prevent this, I left the soldering iron on the location I was welding long enough to build heat to where I couldn't leave my finger on the back side of the fairing. Also, when moving the soldering iron around, the plastic 1/8" or more would move also. When you have the plastic this warm, all the parts will fuse together and when it cools, usually at a fairly slow rate, you get a really good bond. You also can tweak the parts if there is a little bit of warping on one of them and the alignment is not perfect. Here are some pictures example pictures of the welds.

What I did after welded both ears and letting them cool as to not warp if I were to disconnect the fairing from the windshield, was remove the fairing from the bike and then removed the windshield from the fairing. This way I was able to weld the seam from the inside, but also so I could get the areas that I didn't weld as well as I'd have liked because the windshiled was in the way. Also, make sure you weld from the front and back side, because if you don't do the seam on the inside, also, it acts as a stress-riser and is a nice score for fatigue cracking to occur.

After getting all my welds the way I wanted them, I filed as much of the flashing as i could reach with a file...

Then I wet-sanded the welds with 220-grit sandpaper to smooth the welds out and then used 600-grit to clean them up. At this stage, you should be able to inspect your weld. If you can see a thin line where the seam was, you have a cold-weld and will have to reheat the area to get a good bond. If you don't see any lines or seams, it's a good weld.

I had a few, small weld spots that I decided to just fill with primer since the welds looked good. I also had an alignment issue with the left ear, due to either the fairing or the donor ear being warped more than I could straighten without a heat gun that allows heating of a larger area than a soldering iron. I got the two pieces aligned good enough for what I was doing, and with the thickness of the plastic figured I could sand it smooth while letting the primer build the area smooth.

I then primed the area and wet-sanded it with 600-grit. I took it down to the plastic, again, while leaving the primer in the low spots to help build those areas.

I think I have the ears as smooth as I'll opt to make them. This took about five coats of primer with sanding between each coat. This should now be ready for final painting.

I was afraid to repaint the whole fairing, just in case the color didn't match. Fortunately, I had a GM silver that feathered in fairly well with the original color. I only painted the "ears" of the fairing and had it gently fade into the original paint. Once I threw on some decals and the mirrors, it came out looking pretty good.

Back to Desmo Demon Homepage.